Over 30 students joined us this year for our annual Accountancy Summer School. Representing 17 different schools, we took them through a series of short workshops aimed at helping them to understand the role of an accountant, the career opportunities available to those with accounting qualifications and gave advice on C.V’s and preparing for interviews.

We were delighted with the enthusiasm, professionalism and positivity this group of students showed throughout the two days and we’re already looking forward to next year’s event.

Over 30 students joined us this year for our annual Accountancy Summer School. Representing 17 different schools, we took them through a series of short workshops aimed at helping them to understand the role of an accountant, the career opportunities available to those with accounting qualifications and gave advice on C.V’s and preparing for interviews.

We were delighted with the enthusiasm, professionalism and positivity this group of students showed throughout the two days and we’re already looking forward to next year’s event.

Summer School 2019 took place on the 10th and 11th of July 2019. Over the two days, we covered a huge amount with the students who attended. Here’s a summary of the two days:

On this day we covered the following:

We then split the students up into teams of between five and seven and they worked through the challenges below.

We kicked off with an icebreaker. Many of the students didn’t know each other, so this was a great opportunity to put them into teams and set a challenge. Our Tutor, Ian, tasked them with building the tallest tower possible out of straws and sellotape. They could use the original plastic container but nothing else. 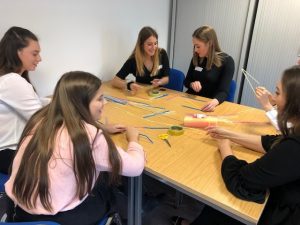 The teams quickly got to know each other and produced some interesting towers. Ian measured the winner but the main benefit of this exercise was that everyone got to know one another and felt more comfortable being in a team with people they’d only just met.

Feeling comfortable was vital for the next part of the day, as the teams really needed to work together. Ian and Emma, our Accountancy Lead, gave them a case study about a clothing company. The text gave an overview of the company, explained their current market and gave some suggestions about how they might expand the business to account for a fall in profits. The team set to work on coming up with their suggested direction for the company’s future. Each team presented back their rationale and three things really stood out. 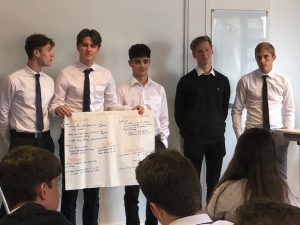 A head for figures

So having analysed the company from a strategic perspective, the teams now turned their attention to the figures behind the company.  They were given data that showed financial and KPI’s of the company over the past four years. This included profits, sales, assets and HR data such as staff turnover and satisfaction.  We asked them to explain what conclusions they could draw from the data they’d been given. Again we were impressed by the conclusions each team had come up with.

Summer School continued on Day Two and this day was all about the world of work and continued to explain the routes into accounting and financial roles. Alongside this, the team gave the students advice on how to look for a role and interview preparation. We also gave each student a short mock interview covering competency questions. We were delighted to be joined by Danielle Burdett, from Success Recruit, who gave the students her top tips for getting a C.V ’employer ready’. Danielle also joined us for the mock interviews to lend her experience of getting candidates ready to meet a potential employer. 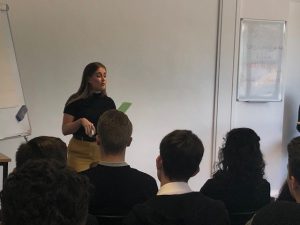 Summer School closed with one of the most popular segments of the two days, the Q&A. We were delighted to be joined by three employers and two of our students.  The students had prepared questions to ask the panel which covered a range of subjects from the very practical to some technical ones too.  Many students were interested in whether they should go on to university or consider an apprenticeship. Others asked about the types of work the panel are involved in and how they became an Accountant. After the Q&A, the students got a chance to meet with the panel and ask any specific questions they had.  We finished off the day with some feedback and here’s what some of the students had to say:

“The two days helped more than I could ever have imagined. It was 100% worth coming to. It showed me there was more to accounting than maths and helped me to realise where I want to go in the future with accounting and how to get there”

“After coming to this event, I now have a much better understanding of what accountancy is and what it involves, as well as the opportunities which can stem from the career. I also found the section focusing on C.V’s and interviews particularly helpful and interesting. I will definitely use what I’ve learned from this session to apply for jobs and apprenticeships”

“I now understand accountancy isn’t just numbers. There are so many different sections to it, all applicable to modern-day. These two days gave some of the best, clear and accurate career information out there.”

This short video gives a snapshot of the two days, in just over a minute.

To search for opportunities in your area, we recommend checking the government’s apprenticeship site here

This website uses cookies to enable proper functioning of the shopping cart features, to analyse site performance and to share with third-party social media and advertising partners. You can accept the use of those cookies here or change how they are used in settings.

This website uses cookies so that we can provide you with the best user experience possible. Cookie information is stored in your browser and performs functions such as recognising you when you return to our website and helping our team to understand which sections of the website you find most interesting and useful.

This website uses cookies to enable proper functioning of shopping cart features, to analyse site performance and to share with third-party social media and advertising partners for marketing and remarketing purposes.

If you disable these cookies the Book Now section will not be able to function properly, and you will need to enableor disable cookies again every time you visit the site.

We use Google Analytics to collect anonymous information such as the number of visitors to the site, and the most popular pages. Keeping these cookies enabled helps us to improve our website and your experience of using it.

Please enable Strictly Necessary Cookies first so that we can save your preferences!

We also use cookies to share information about your use of the site with our social media and advertising partners - including Google, Facebook and LinkedIn - who may combine it with other information you’ve provided to them or that they have collected from your use of their services. By placing cookies on your device, third-party vendors can also show you adverts on websites across the internet, based on your past visits and use of our site. Cookies used for these purposes have expiry dates ranging from 1 day to 2 years. We may also use cookies to follow-up with you by email or other channels if you have abandoned
your basket before checking out in order to see if we can assist with any problems you might have had in making your booking.

Please enable Strictly Necessary Cookies first so that we can save your preferences!